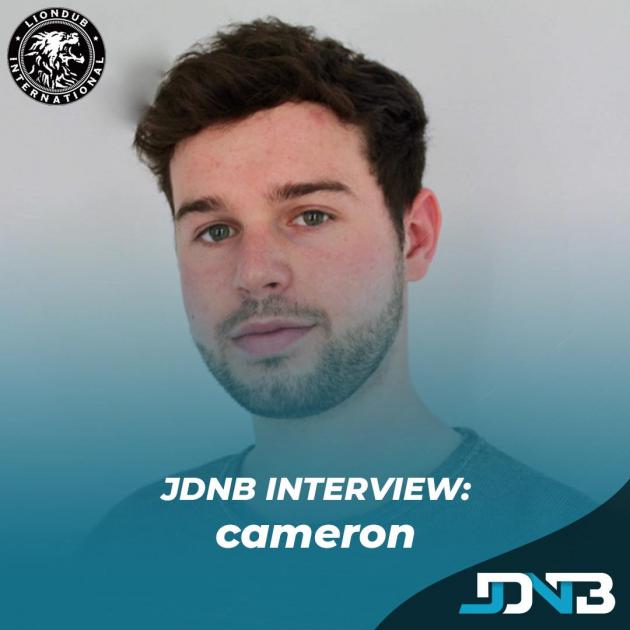 We caught up with up and coming drum and bass producer cameron who recently had a release on the infamous Liondub Street Series with his 'Unfold EP'.  Hailing from Northamptonshire, UK, cameron is a brand new talent with a fresh sound. Coming from a musical family, cameron started producing aged 11, and has since gone on to create across many genres before landing on drum n’ bass. This combination of styles can be heard in tracks such as DFR, where rolling drums are combined with distorted guitars to create a hard hitting yet emotive track. With aspirations of landing spots at festivals and events across his home country and beyond, his new EP ‘Unfold’ is a welcomed next step on that journey.

I know it’s been a tough time for a lot of people, but the first lockdown was a welcome pause for me. I took up trading markets and also made the album we’re talking about now. I wanted to be able to look back on the pandemic and think ‘I made something of it’ rather than sitting on the sofa for a couple of months, so I tried to be busy where I could.

Tell us a bit about yourself and where you come from and what musical influences did you have growing up?

My main influences were rock bands in the first decade of my life. I loved Guns ‘n’ Roses and wanted to be like Slash, with the top hat and everything. I then got shown dubstep by a friend in primary school and showed everybody because I loved it so much, and got told off by that guy for showing everyone this secret new genre he’d found. And it was new, it was unlike anything I’d heard before, and that started my dive into Skrillex, Modestep etc. in around 2010. dubstep then turned into EDM, Hardwell and Avicii, and I wanted to do nothing more than to go to Tomorrowland; I’d seen all the aftermovies 10 times over.

That carried on for a few years, then I was at a hazy campout, you know the classic Year 10 situation. They had a fat speaker set up in the corner, and a friend played Let’s go Back (Cause and Affect remix). I never got the name of a tune. I searched for it for months. It was finally played again at another party, I got the name, built my first bassline set and then I’ve been into rave music ever since. Bassline and garage became drum n bass (still love a garage set though) and I’d have to say my favourite artists and biggest influences now are Bou and The Caracal Project.

How's the dnb scene in Northampton?

I can’t speak much for the town, but in my area there's around 4-5 other producers and we’ve hosted events in the town before and would love to do more in the future. It’s not the top scene in the town really, I’d say raps bigger, I went to the same college as Slowthai, albeit after he’d left but that’s my claim to fame.  He’s from Northampton, as well as Izzie Gibbs, there's a good rap scene growing I think.

It’s people not taking themselves too seriously.

It varies a lot track to track. As you can see from the release, ‘Take Stock’ is a melody-focused track with calm piano, whereas ‘World’s’, in the words of Juno Download, is “a purring, futuristic monster”. I also make sure there's a strong musical theme in each tune that's unmistakable, I don’t like a track to float about not knowing what it's doing. I like to pick a direction musically and just explore the idea.

Hearing High Contrast perform 'If We Ever' with a live vocalist on an outdoor stage was a wicked experience, and I’d say it's the first time I really took dnb seriously.

Your latest release ‘Unfold’ which is Vol.65 of the infamous Liondub Street Series, is out now.  How does it feel to finally get this out there?

It’s been a long time coming, having made the tracks last year and having to keep them secret all this time, but I’m glad they’re coming out now when everything is easing off and the pandemic is lifting (touch wood) and people are able to get out and about and rave again. It feels like the ‘Unfold’ title suits the mood at the moment.

I’d be lying if I said landing a spot on the prestigious Street Series wasn’t one of my biggest achievements so far. Outside of dnb I’ve also produced a garage beat for my brother, which he and a friend of ours rapped on and we made it to Radio 1, after plays on BBC Introducing in our area. I’d probably also say organising a string of 3 raves at a club in town with next to no money with a group of good friends was a highlight.

I produce on FL Studio, on a Macbook Pro which I just plug in to a lovely curved monitor I treated myself to at the start of this year when I took a new job working from home, and at the same time bought myself a pair of Yamaha HS5’s and a comfy chair. That’s all I need, I’ve got a MIDI keyboard but other than that I’m a software guy rather than hardware. I’ve had hardware synths in the past but it’s just the ease of being able to take my laptop anywhere I go and be able to work on something that I love.

I normally look to make a funky chunky rhythm that can just roll in the background whilst I jam with different melody/bass ideas on the top, or I’ll start by looking for a sample with cool defining features to build a track around. I’ll sift through and find something that just makes a tune explode into life in my head, and then make that track.

If you could remix one track from the Liondub Street Series, which one would it be?

I know it’s already in itself a remix, but the vocal from Black Widow by Macky Gee would be fun to flip and mess around with for sure.

Dutta - Easy Does It

What are your goals for the next year?My goal this year is to make the most of every opportunity that comes my way. And playing a festival for the first time would be nice too haha. Other than that it’s just enjoying life and getting myself and my music out there. The pandemic’s definitely given me a new appreciation for freedom after having it taken away, so I never want to take that for granted again

I’d like to say thanks for having me and most importantly thank you for supporting the release. It means a lot.

I want to big up Erik a.k.a the man the myth Liondub for giving me this opportunity on Street Series, and shoutout Spratton