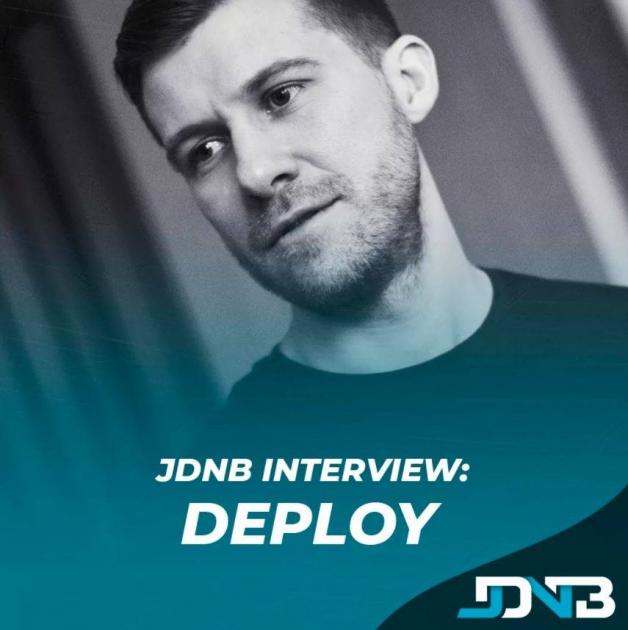 Mark Cousins, AKA Deploy, is a multi-faceted Drum and Bass Producer/DJ and the founder of DTM Recordings.

His musical background being conceived in indie bands, Mark honed his songwriting and vocal abilities until returning to his first love of electronic dance music.

The dedication to working on his music production to achieve a sharp and authentic sound has left a varied imprint on DTM Recordings.

Mark uses his influences to create DnB tunes that vary from structured songs to techy rollers and to explore other musical endeavours he also goes by the alias of Dylan Wilde. With this outlet he employs his vocal abilities and experiments in other sub-genres of electronic music and beyond.

Deploy rolled through for a chat about all tings Drum & Bass.

Happy New Year Mark, great to have you pass through for a chat - are you happy to see the back of 2020?

"Happy new year! Thanks for having me. Yeah that wasn’t the year we all expected was it? Although I think we also knew it wasn’t just going to switch straight back to normal. It’s been a hard time for most of us and I’ve definitely learned to take each day at a time this past year!"

Calling upon your alias for your latest two-track single, experimenting with heavier sounds while retaining a melodic feel - what inspired this release?

"Lyrically, most tracks I write are based on past or present experiences. And musically I always try to capture some sort of feeling or emotion - I end up writing a lot of different styles when I write DnB purely depending on what mood I’m in at the time. I do like fusing vocals and melodies with harder beats and that’s what happened with this release."

"The idea started a while back in 2007 ish when I was at uni. I already had the producer name of Deploy, which is always associated with the military but it was always about deploying music and wanting to bring people together for me, so it made sense to name the label Deploy The Music (DTM). Back then I knew I wanted to release as much wicked music as possible from myself and other artists in the future but it wasn’t until 2017 that the first release came out so it’s still in its infancy - looking forward to building on it more this year."

You were blessed with the opportunity to remix 'Rollercoaster' by DJ Rap, an original pioneer of the sound we all love today - how did this come about?

"Yeah that was awesome to do. Benny V got in touch to let me know that Rap was looking for producers to collaborate with, asked if I’d be up for it and it went on from there. I ended up remixing Rollercoaster ‘cos it caught my ear, it was a cool track to remix. Rap is one of those artists that I grew up listening to, seeing her DJ and buying her records so yeah it was a wicked opportunity."

With so many talented womxn at the forefront of Drum & Bass now - do you feel the scene as a whole is doing enough to support minorities?

"I’m not sure I’m best placed to answer that really as I’m a bit of a studio hermit and am not out and about that much. That being said there’s been a lot of progress since the beginning when it was pretty much all male DJs/producers. I can only draw on personal experience and although I’m aware there may be discrimination I’ve not really encountered it happening to people in the scene myself. So all I can say is that dnb for me has always been about uniting all kinds of people through music, so the more diversity on every level the better. And I think it’s up to individuals and record labels to be more compassionate and open minded towards people in general. I will say though that I’ve worked with a few female vocalists and artists over the years and they’ve all been proper talented and strong minded and so it’s no wonder female artists are breaking through more, its wicked!"

With the events industry taking a heavy blow in 2020 do you see a return to the dance this year?

"Possibly but it might not be legal at first! I can see social distancing happening for a while yet and I sincerely hope the venues and promoters can stay afloat until it does come back."

2018 saw you cook up a collaborative project with Ray Keith and released on Dread Recordings - where did the Fallen EP idea stem from?

"Originally I'd written a full album a while before hand but we decided to pick out some of the best for an EP. Ray put his unmistakable twist on Fallen and Smokescreen and it all just worked really well. I’m still really proud of it, some content was based around a lot of unrest that was happening in the UK at the time and lyrically it could still be valid now. Big up to Ray because I feel he took a punt on that release, it was a bit of an acquired taste at the time from a pretty much unknown producer but I believe making music is about bending the rules?"

What were some of the first tracks that pulled your attention towards the Drum & Bass movement?

Over twenty years experience of Producing music, if you could relay knowledge to heads at the beginning of their career - what would you say?

"Write music you wanna hear and not what you think is going to be the next big thing - because it’ll sound shit and inauthentic! Find like minded, genuine people in the industry to work with and learn from - people who want you to succeed and who you want to see succeed as well. Oh and just finish tracks, learn from them and move on, don’t get bogged down in details and perfection. Enjoy it and have a crack!"

Almost a year of lockdown restrictions have forced Promoters into developing safe alternatives to keep our beloved scene alive - what is your take on the new socially distanced events?

"I think it’s a necessary evil to be honest, DJs and venues have had to adapt to earn a living and also still provide live music for people so it’s great in that respect. I haven’t been to one as yet so I can’t comment on the atmosphere but it’s not really how it’s supposed to be - if you can’t bust out some moves at a dance event what’s the point! As long as it’s a short term measure to keep the industry going, keep the connection and doesn’t end up being the norm then fair play."

Festivals have grown from strength to strength, it would be hard to pick one favourite - give us your top three with a few words.

"Glastonbury just because of the sheer diversity and atmosphere."

"Global Gathering back in the day - super relaxed."

"One Love was ultra chilled and had some wicked sound systems."

So many gifted heads climbing the rungs - are there any rising Producers that have caught your ears recently?

"Cybin - Really like his Shinobi track. Variants - The Painter is refreshing. Substance - Blood Money is a tune."

What can we expect from DTM Recordings, Deploy & Dylan Wilde in 2021?

"There’s definitely more releases coming on DTM from both Deploy and Dylan and like I said I’m open to releasing other artists, so I’m on the lookout :) There are a few projects in the pipeline but I don’t want to elaborate too much right now 'cos if I say I’m going to do something I like to deliver! I’m live on Mixcloud repping the label every month so I play most upcoming releases in those sets before they come out."

"It’s well laid out, got a full spectrum of dnb covered and you support my music which is wicked, thanks!"

Thank you very much for your time Mark, it's been a pleasure speaking, from myself and the rest of the JDNB team we wish you all the best this year. Lastly any shoutouts?

"Yeah just a shoutout to everyone who’s supporting my music, really appreciate it! And as always big up to Nicky Blackmarket, Ray Keith, Bladerunner, Benny V and DJ Rap and yourselves of course - wicked to connect! Also to my missus Becky for helping me with the label and to our newly acquired rescue cats who are clearly into their tunes because they don’t leave my studio!"