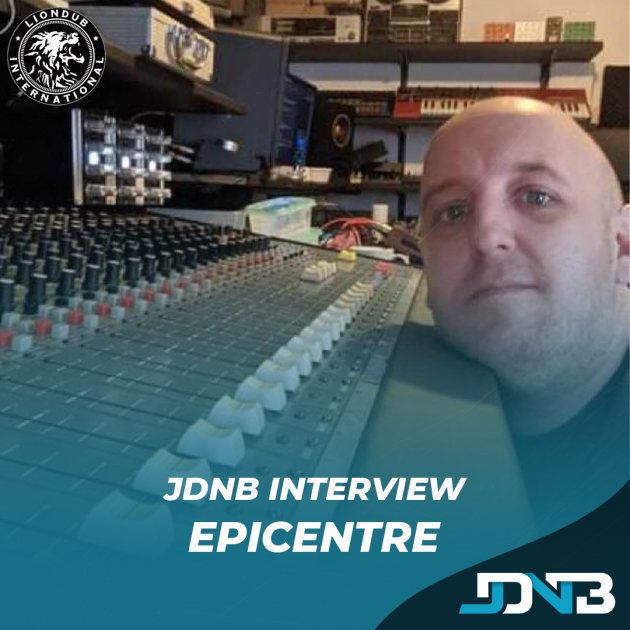 Following on from the Kumarachi interview we thought it would be good to have a catch up and get to know with Epicentre who also featured on the 'Riddim EP' which is out now on the Liondub International sub-label Uproar Audio.

No problem! Thanks for having me.

The lack of gigs and live music really took its toll on my production inspiration early on. I didn't realise before just how much I fed the energy from my DJ shows into my productions so things have been quite slow for me personally. On the positive side of that I have started my own business: Epicentre Audio Research, where I offer analogue mixing and mastering as well as hand built hardware and music equipment repairs.

Tell us a bit about yourself and where you come from?

I'm from a small town called Hyde on the outskirts of Greater Manchester in the UK. Being based here gave me access to the rich music scene and wicked record shops in Manchester and the surrounding area. I started DJing when I was 13/14 years old and quickly discovered my love for jungle/drum and bass. Production didn't come until I was around 19 and I didn't seriously get into that until I was around 25 (i'm 37 now)

What's the jungle, drum and bass scene like where you live?

At the moment it's thriving but the scene around the north west has had its fair share of troubles over the years. It took a very long time for the city to recover from the 'gunchester' era. Those days are long gone now though and the scene in the North West of the UK is stronger than ever.

To me jungle/dnb has always been an all encompassing format, a vibe, an attitude, a way of life. Anyone is free to take the sound and reform it into anything they wish and I feel that now more than ever. From liquid to amen jungle, there is something for everyone!

I had a lot of influences growing up. Mainly hip hop from the likes of Cypress Hill, Biggie, Nas, Das Efx and loads more. As I got a little older I became aware of the electronic music scene from hardcore to trance and of course, jungle.

My earliest memory of jungle/dnb was from a DJ Hype tape I got my hands on around 97/98 Brown Paper Bag was the intro tune and those breaks left a lasting impression that I will never forget.

This is a tough one!

My most recent achievement would have to be the fact I've managed to stay semi relevant without playing the social media game or being part of a crew or brand. Strange achievement I know, but in a world where online visibility is king it's hard to keep yourself humble and just get on with it without falling out of favor with the scene.

Having a special relationship with Deep in the Jungle has to be another one, big up Alex (Dj Hybrid) for believing in my sound for all these years and giving me the freedom to release anything I want. That's something you just don't get from other labels so I hold that very close to my heart.

The release with Kumarachi that triggered this interview made it to number 1 in the Juno chart. That was my first number one release and the fact it's on a label under the Liondub umbrella makes it even sweeter.

How long have you got? haha

My studio has far too much stuff in it.

For production I have the following:

And a stack of stuff in the corner that never gets used!

For mastering I use:

My favourite plug-in right now is a toss up between the Cable Guys Shaper Box 2 and the Newfangled audio mastering bundle.

Heard you're a dab hand at mastering tracks too?

Thanks! I've been running a mixing and mastering service for around a year and it's going really well. Lots of positive feedback and returning customers so I must be doing something right!

So, how do you make the perfect snare, haha?

Dub Phizix - One of the most unique artists in the DnB spectrum and an all round boss and total audio nerd like myself not as current as the other 2 but deserves the mention for spending two weeks tuning a drum kit!

Your ‘Riddim EP’ alongside Kumarachi is out now on Liondub International imprint Uproar Audio.  How does it feel to get this EP out there finally?

It's always a great feeling when music finally hits the streets and is well received. Give me a release that is in every DJ's box over fame and fortune any day of the week!

If you could remix one track from Uproar Audio,  which one would it be?

Brian Brainstorm ft Brother Charity - Rebels with a Cause

My main aim is to keep building my business and get more music products on to the market. Play more shows and make more tunes!

The spotlight it puts on artists new and old. I love reading interviews!

Shout out to Kumarachi for getting me involved in this EP. All the team at Liondub International. Dj Hybrid. Nikki Euphonqiue for giving me my first ever release. Speaker Louis for his great music theory lessons, My Mrs Emma for putting up with me constantly being in the studio, My dog Barry! And lastly anyone who listens to my music, BIG UP!

'Riddim EP' by Kumarachi and Epicentre is out now on Uproar Audio: Download / Stream Here