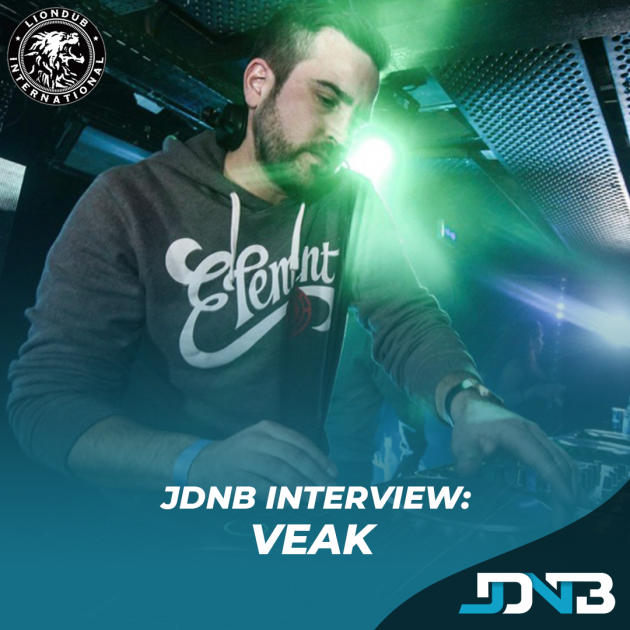 Fierce French based producer Veak started to play drum and bass in 2004. Once he had perfected the djing side of things he knew he would have to take the next step and started learning all about production in 2007. Veak is in high demand for his dj sets all over Europe from his home town of Reims to the massive dnb movement in Germany. Veak is regularly booked for his high energy dj sets fed by a lot of his own productions.

His style is across dnb / jump up / jungle and roller which he has perfected both in the studio and on the decks over the years.

Veak has been on line-up’s alongside names such as Teddy Killerz / Annix / Hamilton / Blocke4d / Phace / Supreme Being and Inside Info just to name a few.  With his latest release ‘Black Bombay EP’ out now on Uproar Audio, we thought it would be good to have a chat.

I coped with it as best as I could, as most people it was a lot of improvisation. But I was able to spend a lot of time at home with my loved ones, to be able to listen to lots of music and play with my friends in Warzone. We tried to keep good vibes in these unprecedented conditions.

Tell us a little bit about yourself and where you are from?

My name is Julien, I am almost 40 years old, soon to have my first child and I am very passionate about music. I come from Reims in the north-east of France, 1 hour from Paris.

What is the drum and bass / jungle scene like in your part of France?

Paris is not far away and drum and bass as well as bass music are very present in the evenings in the capital and it's a real treat. In the city of Reims the drum and bass / jungle scene is not represented as much, it's a shame. I have a lot more people following me abroad than in my own city, it's strange when you think about it. But the scene is changing in recent years.

I grew up with a lot of techno, hip-hop, rock, fusion: the first album of Daft Punk, Snoop Dog, Nirvana, Rage Against The Machine. It was a slap every time. I also realized during a recent report that my generation had the immense chance to see the birth and growth of electronic music.

What first got you into jungle drum and bass, and was there a specific track that made you think “yeah this is the genre for me”?

What attracted me to drum and bass / jungle is the energy, positivity, values ​​and festivity that this music exudes. The Underground side of this UK scene which seemed so mysterious at the time without social networks.

One of the songs that struck me the most was "DJ Ink feat. Dylan - Need You". It was on a mix of Renegade Hardware that I had to listen to 500 times at that time. As well as DJ Hype's mix - FabricLive (2002).  All the songs from these mixes obsessed me. It was an almost daily quest to find them on vinyl.  I succeeded at the time for half of them, I still have them in my collection.

1 : My releases on Killa Dubz / Serial Killaz, DJ Hype to play several times, one of them on Kiss fm (I'm a big fan).

2 : A track in collaboration with Salaryman on Technique Recordings, this label was part of my very first vinyls that I bought and loved to play for a long time.

3 : Have had several gigs in Europe.

Whenever I see a release from you I automatically think there is going to be plenty of amen breaks.   Would you say this is a signature of your sound?

It is true that this break is indestructible. I really like the use of it even though sometimes you might think that it's easy, it's rather hard to make it your own, to put your touch to it and try to surprise people.

You have had releases on Liondub International before, what is it about the label that keeps drawing you back?

There is an efficiency and a unique groove on this label, I am very proud to be part of it.  Some time ago I went to listen to the old and new releases again. I know that with my eyes closed I could play it all at a party.

What does your studio consist of, and what’s your fav plug-in (if used)?

I must admit that I have a rather simple set-up, 1 Akai MPK Mini keyboard, 1 Scarlet 6i6 sound card, Yamaha HS7s, 1 subwoofer (very important for the 808). Otherwise my production software is Studio One (excellent) and in VST I use a lot: Glitch, Massive and Sample One...

Who are your top 3 dnb artists right now?

Serum, Voltage, Bladerunner. They wreak havoc individually, in teams and on their labels. I don't want to miss any of these guys' tunes.

You have your latest release ‘Black Bombay EP’ out now on the Liondub International imprint Uproar Audio. Which track did you have the most fun making?

No doubt Echo, I had a lot of fun playing with that screaming voice as well as to play with that bass and the notes.

What bit of advice would you give to new producers wanting to get their tracks heard by the major labels?

To ensure that the mixdown is of the best possible quality, by trying to mix with pro songs. It is a good indicator to see what can and cannot be improved. Then send a very polite email to labels, containing dozens of songs so that they can see the possibilities, as well as your personal information to be contacted. Then be patient and start over if necessary.

Frankly it's very different, hearing an old Dr Dre track on the radio, listening to reggae in the bathroom, listening to brand new dnb releases, listening to old jungle mixes. There is always an idea that flourishes and makes me want to create a new project. There are some that I finish quickly, all ideas come quickly and it sounds good. And others that I will put aside with a name and a date (very important to find them easily). And a week or 3 months or 1 year later I open them and I finish them with a new ear.