The team at www.jungledrumandbass.co.uk has just re-written Bizzy B's biography for Junglist Records.

If you would like your biography re-writen, or need a press release written up for a music release, any interviews or press generally written from scratch, please get in touch with ali@jungledrumandbass.co.uk 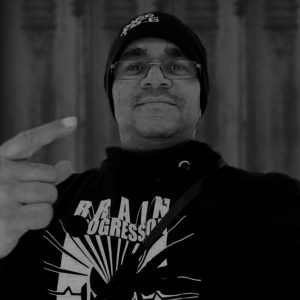 Hardcore, jungle and drum and bass producer and internationally renowned DJ Bizzy B is one of the first originators of the jungle sound. For over 25 years he has been an ambassador for hardcore into jungle and is now championing drum and bass too. The key to his success has been his knowledge and understanding of underground dance music, an alternative music scene which has been in his blood since his teenage years.

From signing DJ Zinc's first release in 1993, which was formed from the Eight Volume Series as "Swift and Zinc", his involvement with The Dream Team and Joker Records is easily considered to be legendary, much like his old releases which are still remembered worldwide today.

His own work with "Brain Records" in the early 1990's continues to be hailed as being the most forward thinking and futuristic sound to pave the way for a new era of musicians. His innovative approach lead to the label releasing some of the best jungle and hardcore around. Classics like "Darkness", "Weekend", "Dubplate Wars" and the "2 Dope EP" are proof that Bizzy has the understanding of the finest amen choppage around. From working with artists such as "TDK" from the roots up he went on to work with Marc Caro (known better as Tech Itch), Peshay, Equinox and legendary Slammin' Vinyl's, Mike Slammer & Red Alert, putting out on Bizzy B’s label all their debut releases.

In 2002 he was producing 2-step and breaks with his Undercover Agent label which went on to have worldwide success and he has continued to release drum and bass under his alias of "Warped Science". His releases can also be found on the mighty Charge Recordings with ‘After F’ on the ‘3rd Planet EP’, making an appearance on the same vinyl release alongside UK respected artists like DJ Friction and DJ Fresh.

For the second half of 2017 Bizzy is on exclusive vinyl-only remix duties for "Red Now" - a tune that was included in the first digital release of "Josephs Perception - Four Elements" on Junglist Records. This is being released on a limited edition vinyl press along with "Never Can Say" which was included on the third release. This will be also released physically as a vinyl-only remix.

You can find releases from Bizzy B on major labels such as "Slowjam" and "Dark Ill" on Whitehouse Records, "Stamina" and "Raw Dogs Relik" on Surburban Base. His classic tunes: “Rebel With A Cause”, “Wicked Man”, and of course “Everyday Junglist” (to name a few) have been smashing dance floors for over two decades. His understanding of a dance floor as a DJ has been made apparent in his musical production; using modern production techniques while remaining in keeping to his old school values as an oldskool flair seeps though the music he makes and plays. From playing to huge audiences at Boomtown Fair, Back To The Jungle at Zoo Switzerland, Bangface UK, Jungle Alliance Brighton, Bass In Ya Face Netherlands, Glitch London and hundreds more, Bizzy B is an undisputed living legend in the jungle scene and has earned the utmost respect from the junglist community worldwide.