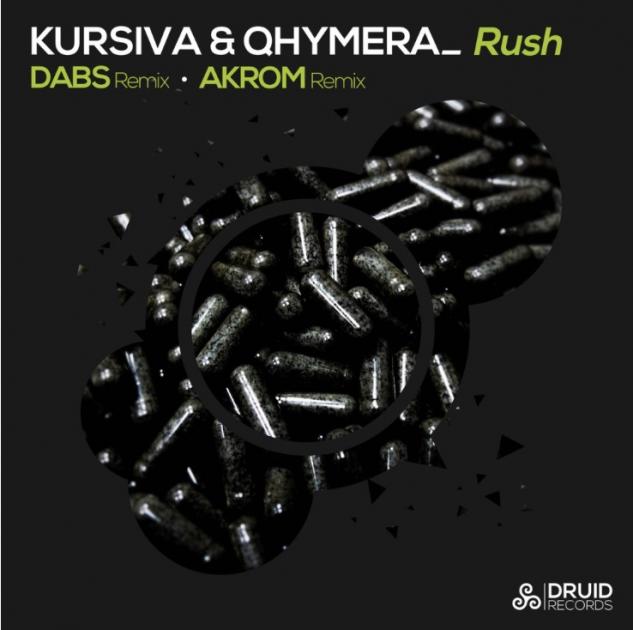 The hotbed of Essex has continued to deliver some of the most cutting edge drum & bass imprints. However, Druid Records have set the agenda for the genre’s darker realms within this creative breeding ground, gaining more and more notoriety within its underbelly whilst pushing a certain level of production within each one of its releases. Their forthcoming EP features a host of artists who also focus on this breed of sound, hailing from different sides of the European market and all bringing their deliciously slick, yet aggressive, version of the darkest regions drum & bass offers on its sonic soundscape.

Spanish producers Kursiva and Qhymera join forces for ‘Rush’, bringing together a wide ranging musical scope which encompasses both their skill within the studio and behind the decks. Blunt rhythms and a solid mix give way to the impeding madness of ‘Rush’, which channels the energy prevalent within every part of Kursiva and Qhymera’s chaotic production style. With an impeccable engineering and a vibrancy within their drum patterns and carefully layered composition, the track appeals to the dancefloor as well as the madness of any moodily snapping DJ set. Its clattering, percussive elements and steeply stabbing synth patterns shows the ingenuity behind their approach, signalling why Druid asked them to join their ranks.

For the second part of Druid’s release, Akrom and Dabs take on remix duties. Italian maestro Dabs draws out a familiar monster for his retake on ‘Rush’, paying heed to its roots yet still managing to twist his signature throughout an intimidating skeleton. And finally, Akrom delivers another smashing take, having already graced the back catalogue of Druid Records with previous singles he’s been asked once again to take pride of place alongside its army of talent. Akrom adds his unbridled creativity into the track’s original composition, adding a more streamlined, weightier sound which still cuts as deep with every added layer. The full EP pulls together four artists who won’t compromise on their production. The exact attitude Druid has maintained from the start, which is why they’ve created such a high standing platform within the very fabric of drum & bass.